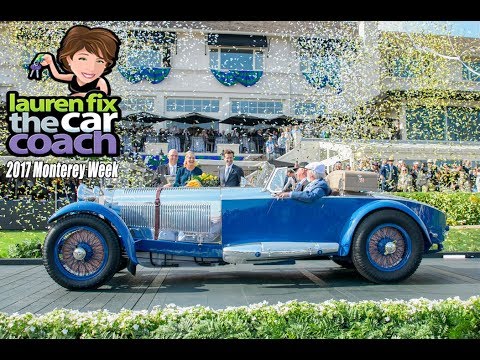 A tradition going back over half a century, the Pebble Beach Concours d’Elegance is where the world’s collector cars meet and compete. Only the 200 best collector cars in the world roll onto the legendary 18th fairway of Pebble Beach Golf Links, and only a handful of those will receive official recognition for style, technical merit and historical accuracy.

But the Concours is only the final event in a packed week celebrating the classic automobile! All over Monterey County, classic cars take to streets, golf courses, parks and the world-renowned Mazda Raceway Laguna Seca, surrounding visitors with automobiles from yesteryear.

The Quail Motorsports Gathering—a laid-back and lavish respite from the packed Concours d’Elegance, a celebration of everything wealthy and gleaming and beautiful: helicopters, French food, Negronis, fancy hats, many good dogs, and the occasional coach built Ferrari. This year at The Quail we saw a man building an AMG engine live, by hand, for our amusement; a gigantic balloon of a bellhop from the Peninsula Hotel, moored by black-shirted staff with ropes in hand; the revival of the nee-Fisker Karma, for some reason; and a pair of Ferrari F50s, one of which had the succinct vanity plate “SWEET F50.” And a 1964 ATS 2500 GTS—built by former Ferrari luminaries, after the great “Palace Revolt”—took home the Rolex Circle of Champions Best of Show, its owner receiving a Rolex Oyster Perpetual Cosmograph Daytona.

This Pebble Beach Concours also raised more than $1.6 million to help people in need. Through the Pebble Beach Company Foundation, the primary charitable partner of the Concours, these charitable funds will benefit over 80 local charities.

How Do I Get the Best Price? 2017 GMC Lineup with Lauren Fix, The Car Coach®