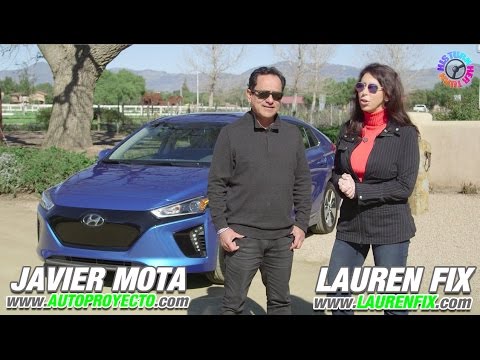 Lauren Fix, The Car Coach® teams with guest co-host Javier Mota to test drive the 2017 Hyundai Ioniq. Watch the video review to see the Ioniq in action and learn about new developments in hybrid and electric cars.

Despite stagnant industry sales share, there has been tremendous activity in the number of hybrid and electric vehicles. Sales are stable a 2.87%. More models being released and less sales per vehicle. ZEV levels have to be 22% by 2025, unless Feds change that.

The Ioniq Hybrid and Ioniq Plug-in Hybrid both feature a new Kappa 1.6L direct-injected Atkinson-cycle four-cylinder engine with an unsurpassed thermal efficiency of 40 percent, delivering an estimated 104 horsepower and an estimated 109 lb.-ft. of torque. This engine has been specifically tailored to the hybrid application and is combined with a quick-shifting six-speed double-clutch transmission.

The Ioniq Hybrid’s electric motor delivers an estimated 32 kW (43 horsepower) with an estimated maximum torque of 125 lb.-ft., powered by a lithium-ion polymer battery with 1.56 kWh capacity. The battery is efficiently positioned under the rear passenger seats. In combination with the 1.6-liter direct-injected engine, Ioniq Hybrid offers a total system output of 139 horsepower while providing low emissions, outstanding efficiency and range. The Ioniq Hybrid Blue model has an EPA-estimated 58 MPG combined rating, the highest rating of any non-plug-in vehicle sold in the U.S. market.

The Ioniq Plug-in Hybrid provides an all-electric range of more than 27 miles based on preliminary internal estimates, powered by a potent 8.9 kWh lithium-ion polymer battery. The Ioniq Plug-in Hybrid’s estimated 45kW (60 horsepower) electric motor is coupled with the 1.6 direct-injected Atkinson four-cylinder Kappa engine.
The Ioniq Electric offers pure electric mobility with a 28 kWh lithium-ion polymer battery for an estimated driving range of 124 miles. The Ioniq Electric has an EPA-estimated 136 MPGe rating, the highest efficiency rating of any electric vehicle sold in the U.S. market.

Sugar cane accounts for 25% of the raw materials used in the interior’s soft-touch door trim panels. Recycled plastic combined with powdered wood and volcanic stone reduces the weight of some interior plastics up to 20%.

Hyundai is also working with ChargePoint to further enhance the Ioniq Electric ownership experience. ChargePoint has the world’s largest electric vehicle charging network with more than 32,000 locations at which to charge, including more than 400 Express DC fast-charging sites. You can charge 84% in 24 minutes with a fast charger.

Free maintenance and no charge fees for the first 50,000. Leasing will have no mileage restrictions. Buyers do not get the maintenance program.

Hybrid available in February, EV in CA only to start. Plug-in hybrid later 2017.