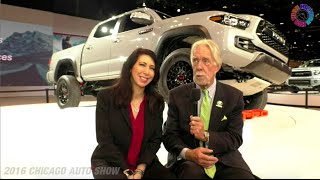 The show runs from Feb. 13-21, 2016. Opening weekend promises an exciting line-up of events and nearly 1,000 different vehicles that will be on display throughout the more than 1 million sq. ft. throughout McCormick Place.

The Chicago Auto Show is a truly great indoor winter festival, featuring nearly 1,000 of the latest vehicles, interactive displays, cutting-edge technology and fun for the entire family. What’s more is show-goers can actually test-drive vehicles during the show with four outdoor drives and three indoor test tracks including Camp Jeep and Toyota’s Blizzard to Beach.

During the two-day Media Preview, thousands of journalists flocked to the Windy City to get the first glimpse of 21 world debuts. Chicago Auto Show attendees can be the first to see the newest cars debuted, including:

Supercars return to the 2016 Chicago Auto Show in full force. The lineup features the first North American auto show appearance for the Bentley Bentayga and includes:

Rolls-Royce Dawn, Ghost, Phantom Drophead and Wraith
Not that every day isn’t a special day down at the Chicago Auto Show, but show organizers have again added structure to the 9-day run of the show. Special days at the 2016 Chicago Auto Show will include:

Women’s Day: Tuesday, Feb. 16. Women will be admitted for just $7. Manufacturers will present women-oriented programs on the purchase and lease of cars and maintenance.

Chicago Auto Show Food Drive: Feb. 17-19. Show patrons who bring three cans of food will receive a coupon for half-priced admission. All food will be donated to A Safe Haven Foundation.

The show runs from Feb. 13-21 and is open from 9 a.m. until 10 p.m. each day, with the exception of the last day, where the show will close at 8 p.m. This year marks the 108th edition of the Chicago Auto Show. First staged in 1901, the Chicago Auto Show is the largest auto show in North America and has been held more times than any other auto exposition on the continent. In all, nearly 1,000 different vehicles will be on display during this year’s show. The Chicago Auto Show features hundreds of interactive, aftermarket, accessories and auto-related exhibits, competition vehicles, antique and collector cars.

Listen to Paul Brian – Drive Chicago Saturday mornings at 8am central on WLS 890AM or iHeart Radio. Subscribe to the podcasts at www.WLSAM.com

His Turn – Her Turn® is a production of Automotive Aspects Inc.