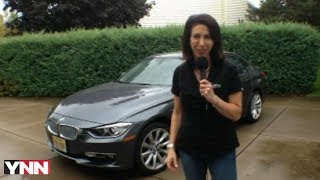 This car earns 24 mpg in the city and 34 on the highway. There are multiple engines offered and over six different models offered with optional xDrive or AWD. Prices start at $49,500 for the 528i.

We test drove the 2013 BMW 528i sedan xDrive, which is the entry level 5-series with all-wheel drive. The 5-Series seats five and has standard rear-wheel drive. It’s powered by a turbocharged four-cylinder engine, which provides plenty of power when combined with a standard eight-speed automatic transmission.

The BMW offered both athletic handling and a comfortable ride. Inside the 528 Sedan, the 10-way power-adjustable driver’s and front passenger’s seats offered nice comfort. In the back, the split fold-down rear seats provided plenty of legroom.

BMW has updated the 5 the iDrive system and added BMW ConnectedDrive, which connects you to navigation, AM/FM stereo/CD audio system, MP3 capabilities, and a 10-speaker, multichannel high-fidelity sound system with 180-watt output power.

The 2013 BMW 5 Series is a great choice for shoppers who want a luxury and performance car with fun driving dynamics.