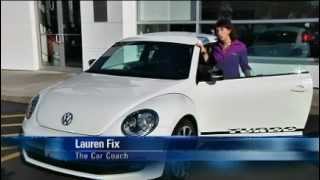 The 2012 Volkswagen Beetle is completely new and has dropped those familiar feminine details for a more masculine feel. Let’s take a closer look.

My test-drive in the 2012 VW Beetle proved that it was a blast to drive. I loved the new Fender premium sound system and a sunroof that’s 80 percent bigger than previous models.

Volkswagen has combined retro and modern design cues in styling. The result is a significant change in the car’s appearance, making this great-looking car slightly wider and longer.

Available features include 19-inch wheels, a panoramic moonroof, and a rear spoiler. Volkswagen also plans to cater to customizers by offering numerous paint colors and wrap options, as well as releasing a “theme” model each year.

It’s not all about performance. There are a million drivers out there who grew up with the old air-cooled bugs. Finally, VW is giving us a modern version of an incredible classic.

The 2012 Volkswagen Beetle is a completely new redesign with a Turbo model. It has a more masculine exterior, better fuel economy, and is fun to drive.