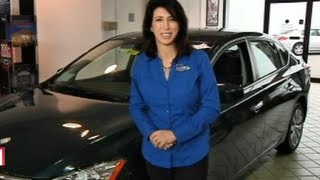 The 2012 Nissan Versa sedan is a new entry level compact that The Car Coach, Lauren Fix, took one for a test drive.

For some time, the Nissan Versa has been known as one of the cheapest cars available in the U.S. for around $10,000. The new 2012 Nissan Versa is built in Mexico.

My test drive car came standard with safety features including anti-lock brakes, traction control, anti-skid system, curtain side airbags, front side airbags, keyless access and engine start and a wireless cell phone link. A navigation system is optional on both the SL sedan and the hatchback.

The Versa is nimble and fun to drive. The steering is precise and the brakes are good for a small car.

The car had moderate body roll in fast turns, but it was easy to park anywhere.

The Versa model did a zero to 60 time in 9.5 seconds, which was quite respectable.

I really liked the roomy interior. There was a ton of leg room and a large trunk, and a very comfortable ride as well.

I disliked the interior use of a lot of hard plastic, but that was to be expected in an economy car. And it needs a center console in the base sedan.

The 2012 Nissan Versa sedan is not about performance and luxury; it’s about getting from point A to point B and getting great fuel economy.

When it comes to getting a great price, in this segment the Nissan Versa is really hard to beat.

Remember, when shopping for a car, do all of your homework and test drive as many vehicles as you can. Check online for best pricing.