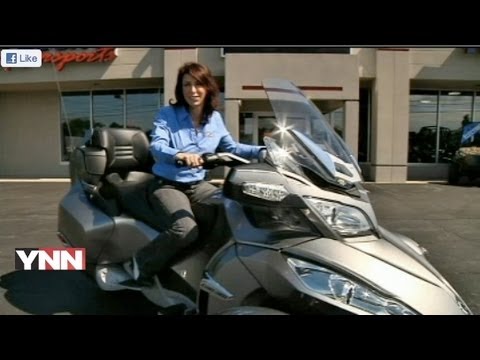 The 2012 Can-Am Spyder is the coolest and most unique motorcycle on the road. Let’s take a closer look.

The Can-Am shook up the motorcycling world when Bombardier, known for making Ski-Doo snowmobiles, off-road offerings and watercraft entered the on-road realm with its three-wheeled contraption called the Spyder. It looked different on the road, its two-front, single rear wheel combination, aggressive styling and a focus on performance, many didn’t know whether to dismiss the oddity as a passing fascination or embrace it as a viable mode of transportation.

The Spyder RS is also equipped with a Vehicle Stability System. It has several technologies it borrowed from the automotive world such as anti-lock brakes and traction and stability control systems.

Competes with all motorcycles:
It’s a good fit for people that want a motorcycle experience but are afraid or not capable of balancing a two wheeler at a full stop.

Dislikes:
• Pricier than competitors
• Fuel economy could be better

My test drive in the Can-Am Spyder was really a lot of fun, it was well-equipped with a smooth riding and easy to handle.

Remember, when shopping for a new car or motorcycle, test drive as many vehicles as you can in the class you are looking in to make sure you find the car that is best for you.